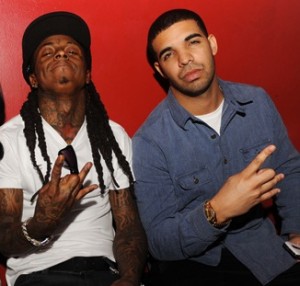 There were rumors earlier this yearÂ about Drake and Lil Wayne doing an album togetherÂ but now Drake confirms they will no longer be doing the LP.Â Â Even though the two said they had their albumÂ in works even before Jay and Kanye did ‘Watch The Throne’,Â they nowÂ are saying no to the collaboration due to Jay’s and Kanye’s recent project. Read inside to hear Drake’s reasoning behind scraping the joint album.

Drake has said that they have decided to cancel Â album with Lil Wayne forever and would instead pursue a collab mixtape with friend and fellow Hip Hop artist Rick Ross. Drake feels likeÂ him and Lil WayneÂ do not want to shadow Jay and Kanye’s project and if they did come out with an album it would be compared too much to ‘Watch The Throne’.

â€œMe and Wayne scrapped the idea of a collaboration album,â€ he told XXL. â€œWe just agreed that it would be looked upon asâ€¦it would be sort of this competition [with Watch the Throne]. I feel like it would get caught in this whirlwind of hype. [Wayne] agreed. We just said, â€˜If we do it, weâ€™ll do it down the line. But right now is not the time.â€™â€

Drake says there is no official release date for his mixtape with Rick Ross but fans can expect it soon.

“To be honest, itâ€™s something I just really wanted to pop up out of nowhere. Iâ€™m not gonna release no single or anything. Itâ€™s something I want to do because I enjoy working with Ross,” he said.

Will you be picking up the Drake/Rick Ross mixtape when it hits the streets?