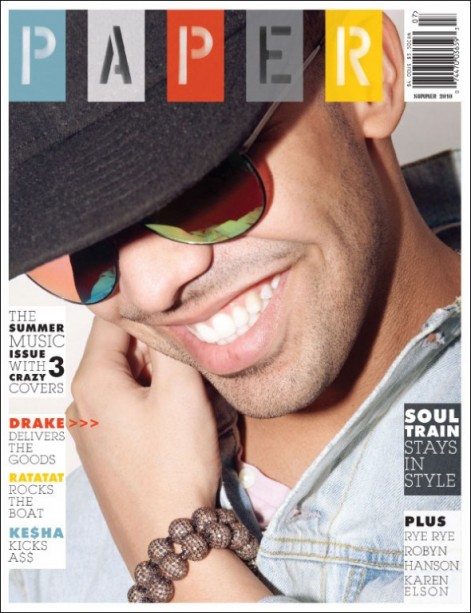 Drake has made the cover of a new another magazine, Paper, where he addreesses negative bloggers, staying calm, and playing Obama in a future film, though he does not have the role yet (July 17).

I definitely havenâ€™t said this before, but I stopped going on a computer. I have a problem where if I go read a hundred positive things about me and thereâ€™s one guy in there who says â€˜I hate Drakeâ€™ thatâ€™s the one I pay attention to. I think thatâ€™s a common problem. Negativity hurts us more than positivity helps us. I asked about 10 or 20 people around me, â€˜Whenâ€™s the last time you went on a website and commented on something, like a song dropped and you went on and said, â€˜That song is hotâ€™ or â€˜That song is terrible?â€™ And everyone I asked around me, whose opinions I respect, the people I love, were like, â€˜Iâ€™ve never done that before.â€™ And these are all level-headed, intelligent people whose opinion I respect, so I just started saying to myself, â€˜It takes a certain type of individual to really participate in a group discussion about someone else, especially if theyâ€™re going super hard with consistent hate.

On how he honors his mentor, Andre 3000 from Outkast:

I have a shrine in my apartment dedicated to Andre. I took a door off a barn and had an artist take the lyrics from his verses [and put them] on this barn door. As soon as you walk into my apartment thatâ€™s the first thing you see.

I hope somebody makes a movie about Obamaâ€™s life soon because I could play him. Thatâ€™s the goal [laughs]. I watch all the addresses. Anytime I see him on TV, I donâ€™t change the channel, I definitely pay attention and listen to the inflections of his voice. If you ask anyone who knows me, Iâ€™m pretty good at impressions. Slowly but surely, Iâ€™m not in the study mode because nobodyâ€™s called me about anything, but I just pay attention so when the day comes Iâ€™m not scrambling to learn how to speak like him. I want to be involved in great film projects. I donâ€™t want to do the basketball movie that everyone does. I donâ€™t want to do the typical black film that everyone expects. I think that I have enough experience to actually be involved in a real meaty project full of substance.