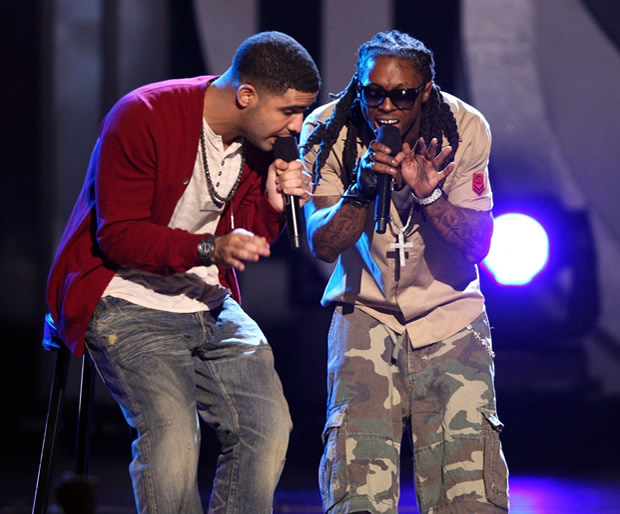 Young Money artist Drake is keeping his vow to label head Lil Wayne to hold it down while he’s incarcerated. “Drizzy” tells MTV.com that fans, “won’t even notice he’s gone.” Wayne began a one-year jail sentence at New York’s Rikers Island prison earlier this month following his conviction on weapons charges. Drake’s new track, “Over,” gives a shout-out to his label and the burden on his shoulders during his boss’s absence. The lyrics talk about how he is, “Making sure the Young Money ship is never sinking.” While on the set of the “Over” video, Drake said,Â  “Im gonna do everything I told him I would do, what I said in the song: ‘keep us afloat til he gets back.'”
Drake also gave Wayne praises, calling the rapper “a legend.” He says,Â  “I could never classify Wayne as a victim. He’s too strong for me. Wayne is who he wants to be. People don’t understand it. It’s really not an act…He’s a rock star, a visionary, a workaholic. He doesn’t function like anybody I know. He’s a rare breed.”