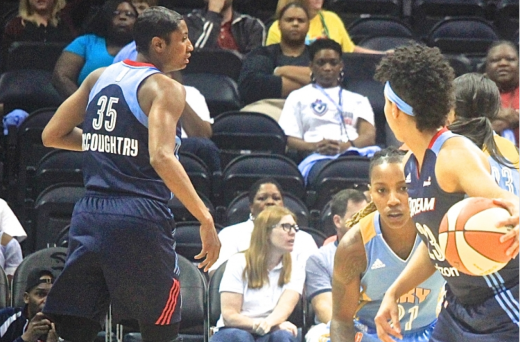 Sunday May 23, marked the first WNBA Atlanta Dream home game since the new season has begun. We aren’t surprised that 2016 Olympic team player and Atlanta’s Dream Team superstar Angel McCoughtry with 21 points led the team in their win (final score 87/81) against the Chicago Sky. This wasn’t an easy task as the Chicago Sky has starter 6’5 Elena Delle Donne, WNBA’s MVP leading the team who actually gave the Atlanta Dream a good run for it.

Mimi Faust, her entourage, Mariah Huq & Dr Aydin Huq from Bravo TV’s Married to Medicine, Bobby Valentino and other ATL celebs were spotted sitting court side supporting our Atlanta Dream team. 94 Streetz Jazzy McBee did a fantastic job during the breaks and half time show giving away prizes to the jumbo tron winners,, welcoming the Jump Rope team and representing for Streetz 94.5. Good deal Atlanta! Please check the calendar and get your tickets to support the Atlanta Dreams this season as they strive to go all the way and get the ring this year!

I was super impressed with newcomer California native Reshanda Gray’s ballgame. She definitely came to win. Traded in the middle of last season, she’s back with the Atlanta Dream this year and not holding back any of her athleticism skills on the court. Carla Corijo did not let her 5’8 stature intimidate her from ending the game with 12 points, 5 assists and her 3 pointers came right in the nick of time which was a big push that helped the Atlanta Dream seal the victory over the Chicago Sky. She did that!

One thing is for sure the Chicago Sky Team were aware that Angel McCoughtry is definitely a scorer, she plays with emotion, definitely puts her heart into it on the court and Angel has the fouls to prove it. It’s no wonder a player with her track record, tenacity and drive to win was named one of the 12 player to the 2016 US Olympic team in April of this year. Her former teammate DeSouza (now playing for Chicago Sky) was doing just the opposite and racking up fowl penalties left and right ending up with three fowls before half time. Maybe she was missing her old team. Whatever the case she could take a page or two out of Angel McCoughtry’s “how to score” handbook and get less fowls and make more baskets!

It was really good to see so many supporters. The crowd and WNBA executives and media were super excited to see Dwight Howard (and his son maybe?) when he stepped in the arena. Dwight was snap chatting and gracing the fans with his presence and a smile. He looked great and appeared to be in good spirits!