Eazy-E Hologram Rocks out at Rock the Bells! 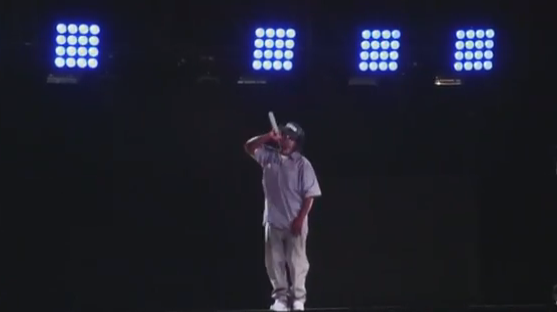 Eazy-E made a special appearance at Rock the Bells on his 5oth Birthday via technology yesterday. It’s amazing how technology can resurrect the dead. The former NWA rapper has been deceased for 18 years but brought much delight to the fans yesterday.

Read the rest below.
A computerized version of Eric “Eazy-E” Wright popped up with NWA at the San Manuel amphitheater yesterday for Rock the Bells. Eazy-E made his mark on Hip Hop and the fans almost 20 years later can’t get enough. The hologram kicked off the act with “Straight Outta Compton”.

This technology is AMAZING! The hologram look so real remember how Tupac had us wondering if he was really back!
Eazy-E’s .

According to Revolt TV, Eazy-E’s hologram performance was a combination of his sons Lil Eazy (the body of the avatar), E3 (the voice), and his daughter Erin (the face). That’s pretty interesting. Check it out for yourself below.

The Birthday Holigram did his thang with “Boyz-N-The Hood” and Bone Thugs-N-Harmony’s “Foe Tha Love of Money.”

WuTang Clan is set to headline tonight’s Rock the Bells concert in San Bernadino.  And they already said they’re featuring Ol’ Dirty Bastard.  That should be interesting!

[youtube https://www.youtube.com/watch?v=xnS2tbgcTc0] One of My favorite artist  Summer Walker  was recently on NPR Music "Tiny Desk Concert" .. I had to show some love and...
Read more
Celebrity Events