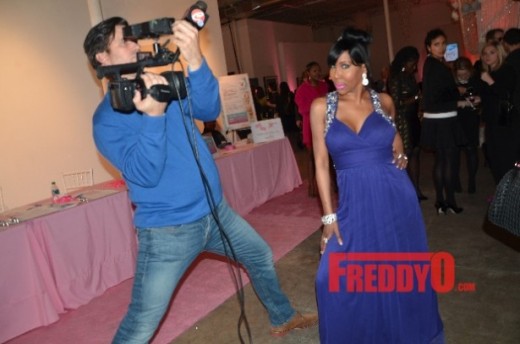 After 7 years with “The Rickey Smiley Morning Show,” our girl Ebony Steele is moving on. We’ll miss her wit, charm and funny personality, and we thank her so much for everything she brought to the show. She will always be part of my radio family.

As a fan of the show I noticed that Ebony Steele was missing; I figured she was on a vacation or maybe they were just trying out the celebrity guest drop in with Phaedra Parks and Porsha Williams. Ebony recently released a statement to the effect,

I will be leaving “The Rickey Smiley Morning Show” as of today. I feel so blessed to have been part of such a special family for 7 great years and have so enjoyed radio, TV, and my association with Reach Media, and Radio One.

Here’s a hint on what’s next! I am going to do something that I have always wanted to do and it involves expanding my entrepreneurial interests. I’ve always taught females that at some point in their lives they have to spread their wings take a risk on faith and grow. No matter what! Now it is my turn to lead by example. It is equally exciting that I am likely going to be able to pursue my dreams right within the same radio family… It is my vision that my new endeavors will allow me continued contact with you, my loyal fans… Stay tuned and stay in touch.

Word on the street is that Ebony Steele has some amazing things in the works. This is a great opportunity for NBC’s “Deal or No Deal” and “Celebrity Apprentice” Claudia Jordan who has a  new job with the Rickey Smiley Show and will be heard across the nation.

I guess the only constant in life is CHANGE. Wishing Ebony Steele much success in her future endeavors!