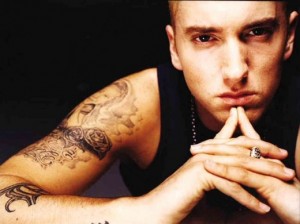 Rapper and actor Eminem quietly and recently granted the wish of a young terminally ill fan named Gage Garmo just one day prior to his death.

Controversial rapper and actor Eminem is at the center of a heartwarming-yet-sad story in which he granted the wish of a young terminally ill fan named Gage Garmo just before his death a day later. Garmo was reportedly diagnosed with a rare form of bone cancer called osteosarcoma three years ago and had been informed he only had one week to live. TMZ reports that Garmo’s family and friends started a social media campaign with the hashtag #GetGageGarmoToMeetEminem, hoping that somehow Eminem would hear about it.

Apparently, Em did hear of the request and arranged to quietly meet the 17-year-old at his Rochester Hills, Michigan home on Sunday evening. TMZ also reports that the rapper was “adamant he did not want the visit to become a media spectacle” and that they spent about an hour talking together. The site says that Garmo was obviously in “good spirits during the visit and after.” FoxNews now reports that Garmo died on Monday at his home.

We send our condolences to the family and friends of Gage Garmo and are glad to report that Eminem was able to fulfill this young man’s dying wish.