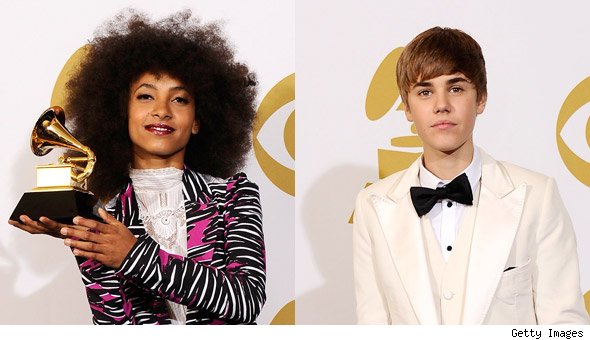 Those silly Grammys should have known better than to give their Best New Artist award to anyone other than Justin Bieber if they didn’t want a tween revolt on their hands. Moments after Bieber lost the prize to Esperanza Spalding, his tech-savvy army of fans began an assault on social media and the entire Internet.

Spalding, an emerging jazz artist with a less fervent following than Biebs, saw her Wikipedia page attacked by the little hackers. At points, her middle name on the page was changed to both “Justin” and “Quesadilla.” Popeater is saying someone also wrote: “Justin Bieber deserved it go die in a hole. Who the heck are you anyway?”

Beliebers, as Justin’s fans are called, went through various phases of revolt following his loss. First, they were very, very angry and acted out on Twitter and Facebook by calling Spalding a variety of expletives, some of which were upsettingly racist.

Following the anger, the Beliebers tried to rationalize what had happened to them and their hero. Bieber fans seemed vaguely confused about how one goes about winning a Grammy. Isn’t it based on how popular you are on Twitter? They seemed lost that someone like Spalding, who has much fewer followers on the networking site, could have been given the award.

“So the Esperanza Spalding has only 8 thousand followers on twitter and how many does justin bieber has?” one fan tweeted and many agreed.

During this time, a small sleeper cell of fans plotted the sneak attack on Spalding’s Wikipedia entry. By this morning, most of Spalding’s page had been restored with its pre-win information.

Bieber himself was gracious about the loss. It is actually win-win for him, since martyrdom typically translates into cash. This will no doubt inspire his army of sometimes wicked fans to try to support the Biebs in other ways. His biopic ‘Never Say Never’ topped $30 million at the weekend box office. His devoted fans now have more of a reason than ever to visit theaters, if only to say, “Esperanza Spalding doesn’t have a 3-D movie.”