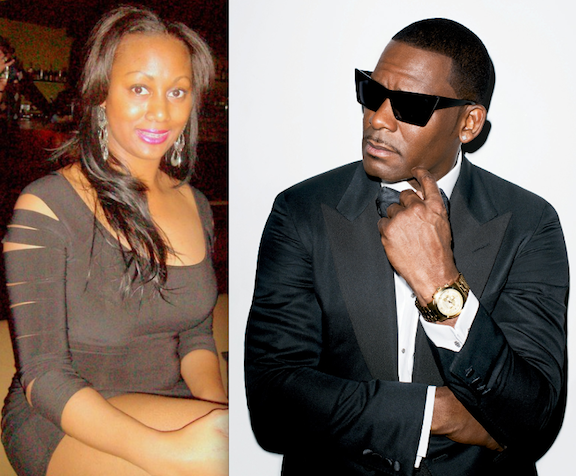 Chante has been the center of media attention not only because of her high profile relationship with Grammy Award Winner R. Kelly, but also due to rumors circulating about possible domestic violence during their relationship. Here she speaks with Freddyo to address these rumors and set the record straight. Check out our exclusive interview inside.

How did you and R. Kelly meet?

I met Robert in 1995. I was an extra in one of his videos. Actually I was asked by one of my girlfriends to go with her and as we were leaving [the video shoot] his people approached me and gave me his number. I called him a week later and that was it.
When did you start dating and how long was the relationship?

I met him in â€™95 around Halloween and we started talking a week later. Then he flew me out to visit him and it turned into 7 years after that.

Yeah it was pretty much off and on but thatâ€™s how it started.

There were rumors about R. Kelly being abusive and possessive in your relationship. Is there any truth to these rumors?

What I want to say about that is absolutely not. R. Kelly was never abusive towards me and thatâ€™s what makes me so upset about these rumors. He has a possessive personality and thatâ€™s with anything he does like his relationships and his music. He was like that with his staff too, heâ€™s just a very dominating person but as far as being physically or verbally abusive towards me, no he wasnâ€™t. Now if he wanted something his way he wanted it his way but it never got to the point where I considered it abuse. That was just how he was and people can see that in his music. He does have an assertiveness about him where it was his way or no way.

So basically youâ€™re saying your relationship was never physically abusive or harmful in any way.

No absolutely not. He has never hit me. The only time we argued was like twice in our entire relationship and those werenâ€™t even real arguments. Heâ€™s never been abusive or put his hands on me. He never even called me out my name or talked down to me. He was never anything like what the rumors said.

Now of course this is an old relationship but sometimes you may speak with your ex, are you and him still in communication?

No as of today Robert and I do not communicate. I seen Robert and spoke to him in July at his L.A concert and that was just briefly. It wasnâ€™t anything major and that was it. We respect one another and we were able to end as friends.

So you two didnâ€™t end on a bad note?

We did not. At that time when we did end we didnâ€™t speak for awhile because his life went into another direction and mine too. But when we see each other its cool, itâ€™s no animosity. I donâ€™t even know what he feels about the rumors. I havenâ€™t spoke to him about it but weâ€™re not in any kind of beef.

Domestic Violence is a very serious issue. Of course we have the highly publicized Rhianna and Chris Brown relationship. Even with the rumors being associated with your name, what is your stance on domestic violence?

Itâ€™s unacceptable. I completely feel itâ€™s unacceptable and thatâ€™s what upset me most about the rumor because I donâ€™t tolerate that. I donâ€™t care who you are, whatâ€™s your status, nothing. Itâ€™s just unacceptable 110% and I wish so many women would learn from the Rihanna situation and other situations. Thatâ€™s why I wanted to speak about it because I have family members calling me and asking me about it and it really pissed me off.

How do you think the rumors surfaced?

Well Robert had a lot of staff with him at the time and we did get into an argument in front of people and I think it just kind of escalated. It was a lot of people around [in his camp] and at the time a lot of these people were friends with some of my people and I think someone felt like they wanted to say that. What happened most of the time between me and him no one was even around. A lot of the times we spent alone together. It was just always a lot of people around and I guess they really were trying to just get him into trouble and keeping his name in a negative light.

Since your relationship with R. Kelly what have you been doing?

Well Iâ€™m a personal chef. I went to culinary art school so I do that and I also have a blog on YouTube with my friend which is doing better than we expected.

Whatâ€™s the name of it?

Itâ€™s called DollzTalk and we just talk about different issues in the media. We started it for fun and then if kind of took a life of its own so weâ€™re doing that and Iâ€™m just enjoying life.

People tend to think that if you date one high profile celebrity you continue to pick from that celebrity pool. If you donâ€™t mind me asking, have you dated any other celebrities?

No Iâ€™ve never dated anyone before Robert or after him. At the time I didnâ€™t even want to date him but like I said itâ€™s just something that happened but no I havenâ€™t dated anyone else. I know that people in the industry jump from one person to the next but Iâ€™ve never done that. I donâ€™t even think I want to date another celebrity because itâ€™s very hard and I like my life simple as possible. Itâ€™s so much being involved in that kind of relationship because you have to deal with their stress and tip toe around certain situations because their stressed out. The media is looking at everything and itâ€™s just horrible. I wouldn’t date anyone else.

If you can tell us one thing about Chante what would it be?

Iâ€™m a strong woman; Iâ€™m very secure with Chante. I would never stand for a domestic violence relationship or a verbally abusive relationship. I would never allow myself to stay in a situation like that. I was a girl who dated a man who happened to be a celebrity figure and certain situations got out of control because of the staff he chose to surround himself with. I would never allow myself to be in a situation that wasnâ€™t in my best interest. I would have never been with him just to say Iâ€™m with R. Kelly. I do want people to know I may not be â€œTeam R. Kellyâ€ but heâ€™s a very good person and he never was disrespectful to me. I donâ€™t know how he is now but when we were dating he was a very respectful man.

So there you have it ladies and gents, Freddyo makes it a point to go straight to the story and get our viewers the truth. Thank you to Chante for speaking with us and please go check out her blog on YouTube called DollzTalk.