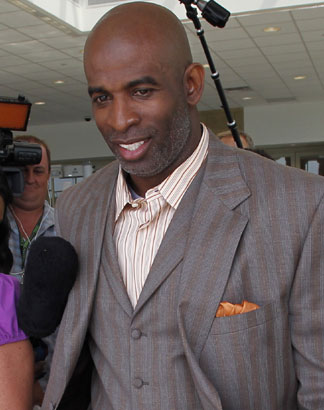 We now know the reason behind Deion Sandersâ€™ decision to divorce his former wife Pilar of more than 12-years after an exclusive from HSK inside.

Sources tell us Pilar BiggersÂ was far from being a model wife to the NFL great. Sure, previous reports point to a secret jump-off at the center of infidelities between the estranged couple â€“ but those infidelities wouldnâ€™t be actions Deion is guilty of. Thatâ€™s because HSK has exclusively learned 39-year-old Pilar Biggers was cheating on Deion Sanders with a 22-year-old Dallas man!

You may remember back on September 23, 2011, Deion Sanders served Pilar with divorce documents. Sources tell us thatâ€™s after the football legend learned of Pilarâ€™s ongoing extramarital affair with 22-year-old aspiring singer Derrick Smith aka â€˜D-Joâ€™. Sources say Pilar â€“ who weâ€™re told is looking to break-out as the newest female rapper â€“ attempted to dodge being caught cheating by claiming to manage the young music man while the pair were secretly smashing. But thatâ€™s not all!!! Weâ€™re told Pilar is also sexually connected to a well established New York City native and multi-platinum rapper!

This news comes as the 19-year-old woman previously reported to have been involved in an extramarital with Deion Sanders, during his marriage to Pilar Biggers, admits those reports were lies! Aleea Stanton has since surfaced to retract the statements she says her mother â€“ Angela Stanton â€“ created to generate a buzz surrounding her upcoming book. In Stantonâ€™s own words, â€œThe most I ever did with that man is hugâ€œ.

Letâ€™s not forget â€“ after Deion Sanders demanded a divorce from Pilar, sources say she initially pleaded with the NFL legend to make the marriage work. Weâ€™re told the cheating and abuse allegations against Deion only began to surface after Pilar Biggers realized Deion was adamant about his decision. Sources say this was all a scheme created against Deion to secure Pilar big bucks after their divorce.Â Thatâ€™s exactly why insiders say Pilar took to social media and press outlets to paint a picture of being betrayed by Deion, while covering up her own dirty doings. 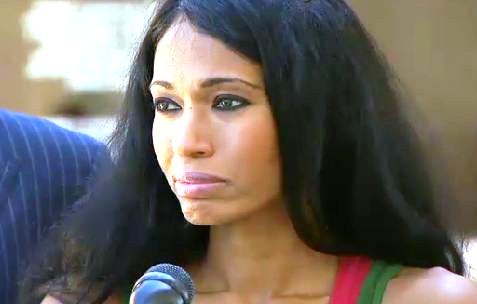 Hereâ€™s what an insider had to say about Pilarâ€™s recent open letter to Deion:

â€œPilar and her crack-smoking publicist Kali Bowyer are trying to deface Deion for quick bucks.Â Sheâ€™s currently receiving $5,500 monthly, but I guess thatâ€™s not enough money because she has to pay for Erikâ€™s studio time and her own luxury lifestyle. How could Pilar use such lies to hurt Deion?Â Pilar is also claiming her and Deion have marital property â€“ in Prosper, Texas â€“ together.Â But thatâ€™s not true because her name was never on the deed.Â Itâ€™s Deionâ€™s house and all he wants is to show his kids the most love a father can give.â€

To be sure, Pilarâ€™s open letter was released shortly after a Texas judge recently awarded Deion temporary custody of their two sons and slashed Deionâ€™s child support order in half â€“ from $10,500 a month toÂ $5,000 a month.