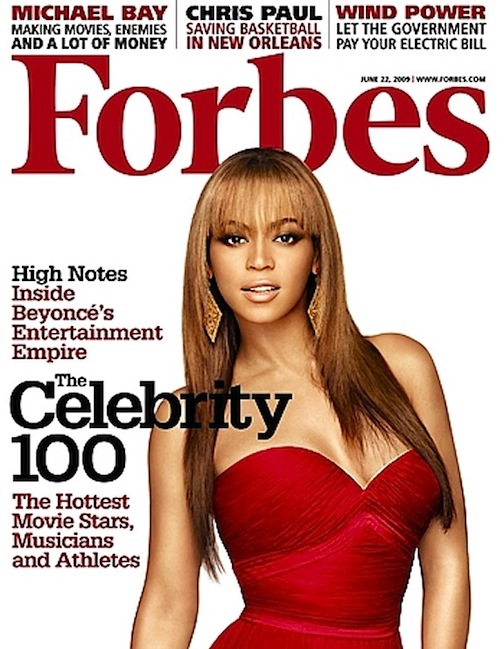 Forbes released their annual Best-Paid Celebrities Under 30 list this week with Lady Gaga’s meat purse holding an estimated $90 million in cash money. Beyonce, Rihanna and Lil Wayne made the list as well raking in a combined total of $79 million.

Forbes tallied the earnings of the young stars between the months of May 2010 and 2011. Nine musicians made the cut, with Justin Bieber being the youngest and the 29-year-old Queen B the eldest of the group on the list. Beyonce popped up at No. 8 after earning $35 million. Forbes noted that was low placement for the diva due to the fact she spent most of the past year off the road and recording her new album, ‘4,’ due June 28. The earnings come from mostly non-music related ventures like her fashion label Dereon and promotional contracts with L’OrÃ©al, DirecTV, General Mills and more.

Rihanna earned $29 million placing her at No. 11, thanks to her chart-topping fifth studio album, ‘Loud,’ and tour behind it, which will continue throughout the summer. Lil Wayne just barely made Forbes’ list with his $15 million in earnings in the past year, which is quite the feat considering he was incarcerated at New York’s Rikers Island through November 2010, for gun possession charges. Jail didn’t stop him from releasing an album — ‘I Am Not a Human Being’ — that nabbed the No. 1 spot on the charts and crowned him the first rapper since Tupac Shakur to have a No. 1 album while in prison.

Other music acts on the list included Taylor Swift (No. 5, $45 million), Katy Perry (No. 6, $44 million), as well as Carrie Underwood and Miley Cyrus who tied little Weezy for the end spot, earning $15 million each.