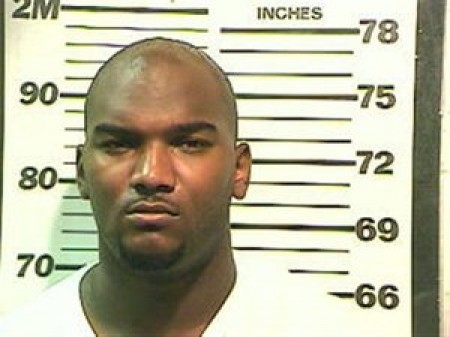 Former Oakland Raiders quarterback JaMarcus Russell was arrested in Mobile, AL yesterday for possession of a controlled substance. The substance in question was codeine syrup. Â According to jail records, he was booked yesterday afternoon and released a few minutes later. Russell was the #1 overall pick back in 2007 — but was cut by the Raiders a few months back. Maybe he is a little distraught after being one of the biggest bust’s in NFL history. Why is this man drinking lean??

Myles said Russell was arrested at his home early this afternoon during an undercover investigation.Â  Police did not find a prescription for the codeine during their search, Myles said.Â  Other people were on the property, but Russell was the only one arrested, according to Myles.He was booked into Mobile Metro Jail at 4:22 p.m.Â Â  Russell was released minutes later after making $2,500 bail, according to online records.

He was released because he only won seven of his 25 starts and was benched. He completed just 52.1 percent of his passes in his career with 18 touchdowns, 23 interceptions, 15 lost fumbles and a passer rating of 65.2.Â Oakland paid Russell about $36.4 million through the 2009 season. Since the start of the common draft in 1967, only one other No. 1 pick was released this quickly in his NFL career. Indianapolis cut 1992 top pick Steve Emtman after three seasons, but that was more because of injuries than production.