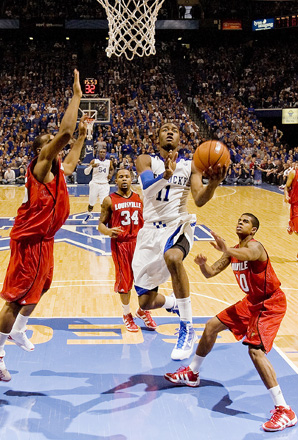 Basketball fans, its almost that time again…The NBA draft. There is a lot of talent in the pool. I wonder who will go number 1…..

John Wall, 6-4 freshman point guard, Kentucky. Three of the scouts think the world of Wall. “The only true star I’ve seen,” said the No. 2 executive of an NBA team. “I thought he was very special when I saw him in person and the way he took command of the game. I didn’t expect anything like that. He’s a better version of Derrick Rose because his hands are so quick.”

Â Evan Turner, 6-7 junior swingman, Ohio State. The scout who is skeptical of Wall believes Turner should be ranked as his peer. “Wall and Turner are Nos. 1 and 1a. Turner is going to be an All-Star. I have great faith in that. His size, his approach, his style of game — all are suited to the pros.”

Wesley Johnson, 6-7 junior forward, Syracuse. “Wesley Johnson has been the surprise of the year,” one scout said. “He has a lot going for him — size, skills — and he’s the reason behind Syracuse’s 18-1 season. He has the potential to be very special, and I’m told he has a good basketball mind. At the end of the day, he can be a 20-point scorer, a good rebounder and a passer.”

Cole Aldrich, 6-11 junior center, Kansas. The No. 4 spot is where the scouts started having trouble coming up with names. All agree that Wall, Turner and Johnson will share the top three picks, but Nos. 4 and 5 generate a variety of names with little conviction for any of them.

Willie Warren, 6-4 sophomore shooting guard, Oklahoma. Take your pick here. “If a team needs a big, they’ll take Aldrich; if they need a point guard, they’ll take Willie Warren,” an executive said. Though Warren is listed as a shooting guard for Oklahoma, he has the potential to shift to the point in the NBA. “He is talented, he’s quick, he can shoot it, and I think he can be a ‘1.’ If he was in last year’s draft with all of those point guards, I don’t think he would be rated this high. But this year, after John Wall [and potentially Evan Turner], there is no other point guard. So he is going to benefit from the timing of the draft.

For all my basketball heads following the draft, who is your number 1 prospect?