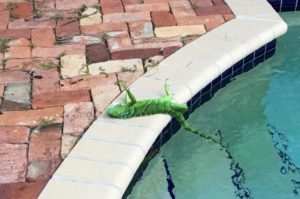 Cold-stunned lizards may look dead, but they’re not in Dania beach, Fl. – It’s so cold, iguanas are falling from trees. The Local 10 News reporter Parker Branton stumbled upon an iguana frozen stiff Wednesday morning in Dania Beach. He found several others clinging to branches before making the plunge to the ground. 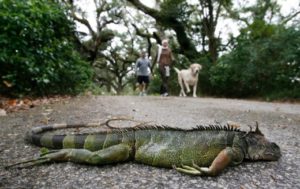 The National Weather Service in Miami issued a rare forecast warning Tuesday on Twitter. “This isn’t something we usually forecast, but don’t be surprised if you see iguanas falling from the trees tonight,” the tweet said ahead of the region’s coldest temperatures in two years. it’s well documented that South Florida’s iguana population goes into shock when temperatures dip below 50 degrees, sending many of these invasive lizards plummeting to the ground.

The cold-stunned creatures appear to be dead, but they’re not. Blake Wilkins, co-owner of Redline Iguana Trapping and Removal told Local 10 News reporter Saira Anwer that days like Wednesday make his job a little easier. But the reptiles won’t be this easy to catch for long

“From what we’ve seen in the past, once the sun hits them, they start to kind of wake up again,” Wilkins said.

Wilkins said iguana removal is important because the reptiles damage everything from sidewalks to sea walls, and experts say they create an imbalance to Florida’s natural ecosystem.