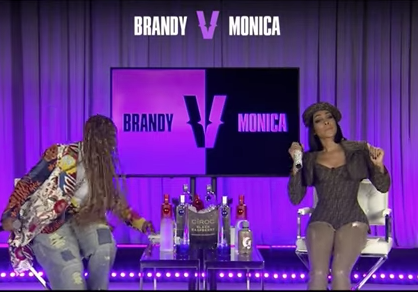 The ultimate battle of the hits that everyone has been waiting went down and broke verzus history.  In case you missed it or wanna watch this match up again here it is.

As soon as Monica and Brandy walked out; everyone was like Monica killed it already with her outfit. Monica came to slay. It was a great virtual event that took place at Tyler Perry Studios; rather you were a Brandy , Monica , or both fan you have your opinion of who won. Monica also chose this platform to preview her new single “Trenches” with Lil Baby. I would say just because every record Monica played was a classic sing a long hit.

They had a consistent 1.1 million viewing the ladies going over 20 of their top hits. They even beat the 2nd most watch verzus match between Babyface and Teddy Riley. At the end Brandy drop the news, look out for the Brandy and Monica tour coming soon. Make sure you follow @verzustv for the next match up.