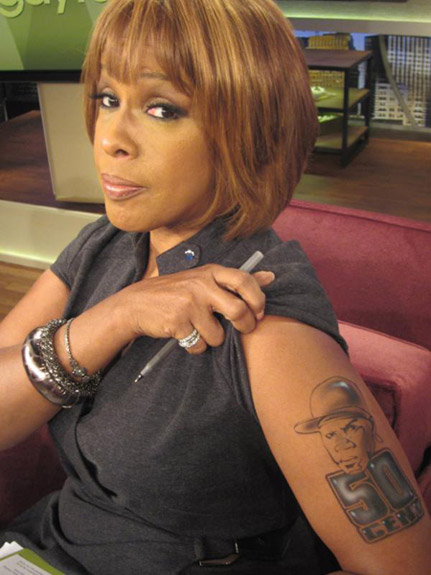 Oprahâ€™s best friend Gayle King has done something no one thought she would ever do. On her OWN talk, she invited Curtis James Jackson â€“ a/k/a 50 Cent â€“ to talk about bullying, but before the talk could commence, she took a moment to share with the audience her new piece of body-art.

On her left bicep, King has a temporary tattoo of the face of rapper and now actor 50 Cent along with his name. He appears in a do-rag and fitted cap. Perhaps itâ€™s a kind gesture since Fif has a cat named Gayle and a dog named Oprah.

At one point, King joked about the possibility of a relationship together and how the tabloids would react to such a story.

â€œIf 50 Cent and Gayle got together, do you know the scandal that would cause?â€ she said

Back to bullying, the rapper displayed a softer, compassionate side of himself, explaining that he grew up in an environment where bullying was the norm.

â€œThe actual environment that I grew up in, if you didnâ€™t create an example of you not being afraid of the altercation or situations that could possibly take place, there was a higher probability that youâ€™d be involved on the other end of it,â€ he said.