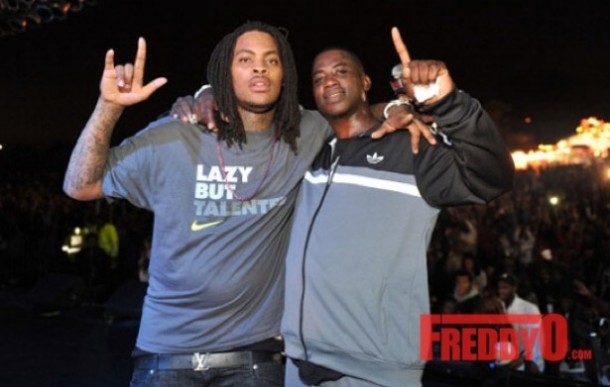 Gucci Mane is suing Waka Flocka Flame and his mother Debra Antney for thief and career sabotage. I swear these two needs to be on a reality show they know their lives is full of drama and intrigue.

Gucci Mane is blaming all of his career woes on Waka Flocka Flame and his mama Debra Antney. Gucci is claiming in a new lawsuit that the mother/son duo have sabotaged him and stole money. In the claim Gucci states that he hired Waka’s mama Debra Antney in 2006 to be his manager and that the pair have robbed him blind.  In the lawsuit the mother and son are accused of releasing Gucci’s music and collected royalties without his permission and that his manager made herself CFO of Gucci’s corporation without his knowledge.

In addition to making herself CFO she took more than her agreed upon 20% to manage him. Due to this abuse Gucci is stating that he’s out of money, his reputation is ruined and he’s in trouble with the IRS.  Now Gucci is suing for fraud, racketeering, and conspiracy … and wants the courts to freeze Waka and his mom’s assets. In addition he wants Waka’s mama to return a ring and chain she stole from him.

Cues on the theme music from Young & The Restless because I am sure this is going to be really interesting.