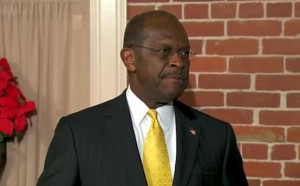 Looks like all the accusations is running Herman Cain from presidency. The Republican candidate hopeful has suspended his campaign from the 2010 race. Cain expressed,

“So as of today, with a lot of prayer and soul-searching, I am suspending my presidential campaign because of the continued distractions and the continued hurt caused on me and my family.”

Look inside for the official video.

After the latest accusations of the 13-year affair with a woman named Ginger White, Cain’s campaign has been going rock bottom.Â  Cain decided to suspend his 2012 campaign because of the “White House with lack of funding, sagging poll ratings, lack of foreign policy knowledge, and bad staffing cited among his major issues. ”

What do you think of his decision?