‘He’s A Bullsh*tter’: Obama Didn’t Hold Back While Talking About Trump To Friends 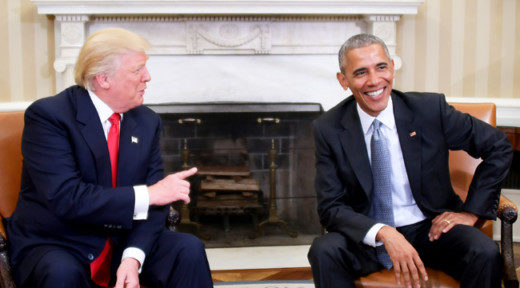 After a few months punctuated by rare Obama sightings — including a strut through Manhattan and a windsurfing extravaganza — the most recent former president has been carefully edging back into public life.

He’s only providing a little face time and the occasional speech, which means that his supporters still have a chance to miss him. However, this also provides a vacuum into which some gossipy tidbits shall flow. This would include People‘s discussion with two Obama friends, who relay what he really thought after Trump won the election and suddenly became an Obama fanboy:

“He’s nothing but a bullsh**ter,” Obama told two friends early last November, describing an election night phone call with Trump, in which the businessman suddenly professed his “respect” and “admiration” for Obama — after years of hectoring.

Harsh? Not really. Trump spent eight years slamming Obama (including all of that birtherism nonsense) and hasn’t stopped yet, so “bullsh*tter” would accurately describe someone who insincerely gushes, as Trump tends to do.

Also, People generally only publishes publicist-approved dirt, so the chances of this story being true are greater than, say, with the National Enquirer(which is largely a Trump mouthpiece these days anyway) or Star. However, this little morsel doesn’t take into account all of the events that have transpired since election night, including Obama’s supposedly “livid” reaction when the new president accused him of wiretapping Trump Tower.

Presumably, the full People interview will reveal more juicy thoughts, but one of the friends did reveal that Obama’s still not loving the new guy: “It hasn’t gotten any better.” Especially not this week!