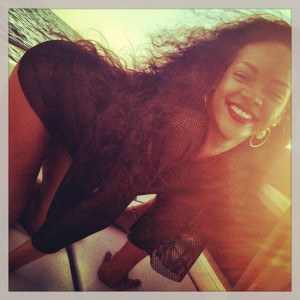 Instagram has given our favorite bad girl the boot! She continously went against the site’s policy and has lost acess to her IG page.

Check out the details below:

Alison Schumer, an Instagram PR team member, informed Daily News, “Yesterday, we briefly disabled the account by mistake and restored it quickly.” Than she stated, “I can confirm that we have not deleted the account subsequently.”

RiRi kept testing the limits and posting inappropriate picture on the social media site, which is against their policy – NO NUDE PHOTOS. However, the starlet was not phased; therefore, IG decided to teach her a lesson. It was first noticed when her fans tried to access her page, but were met with a “Page Not Found” message.

She broke the rules by posting her cover image she took for Lui Magazine. The picture revealed a topless Rihanna, which caused her page to be flagged. Next, she decided to repost the same pic on her Twitter account; taunting IG. And to add the frosting to the cake, the singer mocked IG by posting various animated photos that were similar to the Lui cover.

I guess it is safe to say she is our favorite rebel! We all know Rihanna’s Navy is extremely upset and they are paitently waiting for her page’s return. Do you think she was taking it to far on IG?