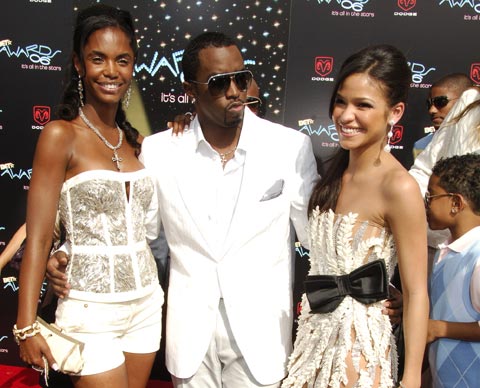 According to the YBF, Diddy popped up on the set of his Dream Team homie Rick Ross’ video the other day, and, of course, he brought Cassie “the shadow” along as usual. Diddy’s trillema has apparently come around again, but maybe it never left…the Kim Vs. Cassie situation. But Diddy said something that made us raise our eyebrows. Is he confirming what we’ve already known for a minute now…check out the video and you be the judge.

Behind the scenes of Ricky Ross’s “B.M.F.” video, Diddy was getting his Diddy Bop on and started rapping one of his songs.Â  While he is rapping, he kept grabbing a lurking Cassie to bring her on the camera.

And at the 2:33 mark, Diddy said “Now My Girlfriend Is Blonde Like Marilyn”, and grabbed Cassie’s blonde hair to show the camera.Â  Chick lit up like a Christmas tree.

So, is he finally coming out to confirm they’re dating, or just pulling playing with the media?Â  Hmmm.