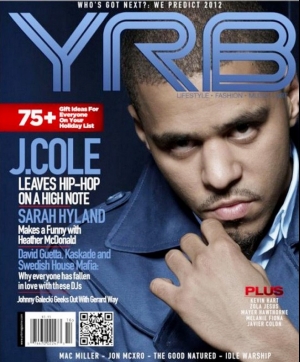 Check inside for more on what J.Â Cole had to say during his interview.Â Once just a young kid from Fayetteville, N.C looking to rap beside some of his biggest influences in the game, J. Cole has officially made a name for himself. The Grammy’s have acknowledged the rapper by giving him two nods at this years awards and he says all of that means nothing, as long as his fans ride with him.

â€œOf course, I want to do big numbers, but my focus is not on numbers,” he said. “My focus is on the album. Like, how good can I make this album? Can I change the game musically? How can I come back and shock the game for real? I went through so many hoops of fire just to get this album out. I had to go through a lot of red tape and shit, but this [next] album, nobody canâ€™t tell me nothing. Iâ€™m excited about that freedom.â€

He also discusses his upcoming plans to have aÂ collaboration with Kendrick Lamar and lets fans know this is something that is still in production and something that he is very excited about. Cole evenÂ says that although he just released his first studio album Cole World: The Sideline Story, he hasÂ been in the studio hard andÂ has so much new material that he could come out with a second album today.

â€œI have that many songs, but of course, itâ€™s not that simple. You really want to make a body of work. Iâ€™m saying all of this to say, Iâ€™m staying away from talking it up too early. Iâ€™m just really trying to get my direction right now. Iâ€™m making beats, Iâ€™m writing rhymes. Iâ€™m not sure what itâ€™s going to sound like. It could be totally different from this album, or it could be a continuation. Iâ€™m not sure. But Iâ€™m working and building … â€œI just want my albums to improve and I just always want to keep up the quality. I want the next album to kill this album, and I want the album after that to kill that one.”

Such a humble young man who we know doubt can agree that will be making a permanent position in this Hip Hop game for years to come. Congrats to Cole on his debut album going Gold and also the first time Grammy nods.