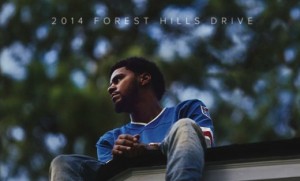 J. Cole has landed yet another number one album on the US Billboard 200 chart with the release of his third effort, 2014 Forest Hills Drive! This makes the “Crooked Smile” rapper’s third Billboard 200 chart-topping album with his 2011 debut album Cole World: The Sideline Story also garnering the number one spot and the follow-up Born Sinner in 2013 which initially debuted at number two then moved up to first place.

Cole released the album without the standard promotional efforts and since he’s obviously got a significantly loyal fan base, 2014 Forest Hills Drive sold a total of 375,000 units (digital and physical copies) in its first week of release according to Nielsen Music data for the week ending December 2014! Cole had only released viral videos that discussed the forthcoming album, no singles, and also hosted personal listening sessions for his fans.

Congratulations are definitely in order for J. Cole on this latest achievement!