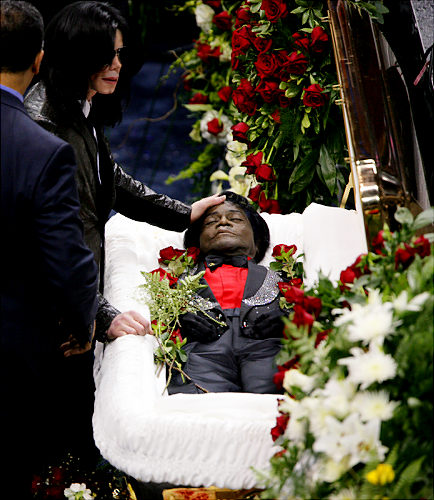 How creepy is this. Last week, a daughter of James Brown claimed that the legendary singer’s body had gone missing. Now, according to a new report, the Godfather of Soul is still resting in a crypt on the property of another daughter, hopefully putting an end to this bizarre tale.

This odd case all started when LaRhonda Pettit, an illegitimate daughter of Brown, told UK’s Daily Mirror that Brown’s body disappeared from the home of Deanna Brown Thomas. Now, the funeral director who handled Brown’s burial says the body is in the same place it’s been since his death..

“There’s no truth to that,” Charlie Reid, C.A. Reid Funeral Home’s director, told the August Chronicle. “It would have had to have gone through us. We would have been contacted if that happened.”

Even the police have said they don’t buy Pettit’s claim. “I have not heard that. I would expect we would have knowledge of such a thing,” said a spokesperson from the Aiken County Sheriff’s Office.

Naturally, if this were true, Pettit should have gone to the police rather than a newspaper. “This would be a criminal offense,” Reid said. “If this was the case, she would need to talk to police.”

Pettit suspected that the missing body was part of a sort of plot to cover up the true cause of Brown’s 2006 death, which was reportedly due to heart failure brought on by pneumonia. She believes that drugs were involved in the death, and an autopsy has never been performed on his body. Still, so far she appears to be alone in her belief of this conspiracy.