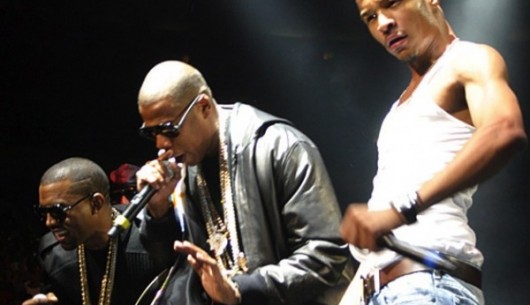 Jay-Z and Kanye West will be taking their upcoming album on the road this fall. The hip-hop super duo has announced plans to launch a North American tour on September 22nd in Detroit. The trek will hit cities like Philadelphia, Chicago, Los Angeles, and Houston before wrapping up on November 3rd in Boston. Pre-sale tickets will be made available on Live Nation’s website starting on Thursday, with general tickets being made available for purchase on August 8th. In addition to their upcoming tour, Kanye and Jay have also revealed that they will be going by a new name”The Throne.” I really don’t know about that name it sounds God like what you think?

“The Throne” will be touring in support of their highly-anticipated record, “Watch The Throne.” The album will be arriving exclusively at iTunes on August 8th, while the physical version will hit stores on August 12th.

P.S. someone said TI might be working with them after he gets out…. Hummmm lets hope so…

Here are the dates for “The Throne’s” upcoming tour: