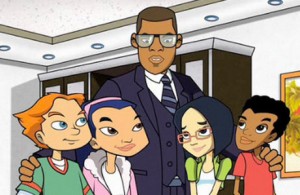 If the Carters don’t know how to do anything else, they know how to make some money! Jay-Z latest profitable business venture is making a cameo on the new cartoon series Secret Millionaires Club. His character is perfect for this show too! In the cartoon, he inspires children to use their business practices to help others. The clip also features his hit song Empire State of Mind which features Alicia Keys. Check it out inside.

The creator of the show, Warren Buffet, stated that the reason he created this show was because, “I saw an opportunity to have a good time and maybe get a fair number of kids in this country started with the right financial habits”. This is a cool way to get through to children. Too bad Barney and the Teletubbies didn’t teach kids stuff like this.

What are your thoughts on this television show? Jay-Z is the just one of the first on the new show. What other celebrities do you think would be good candidates to make cameos on the Secret Millionaires Club?