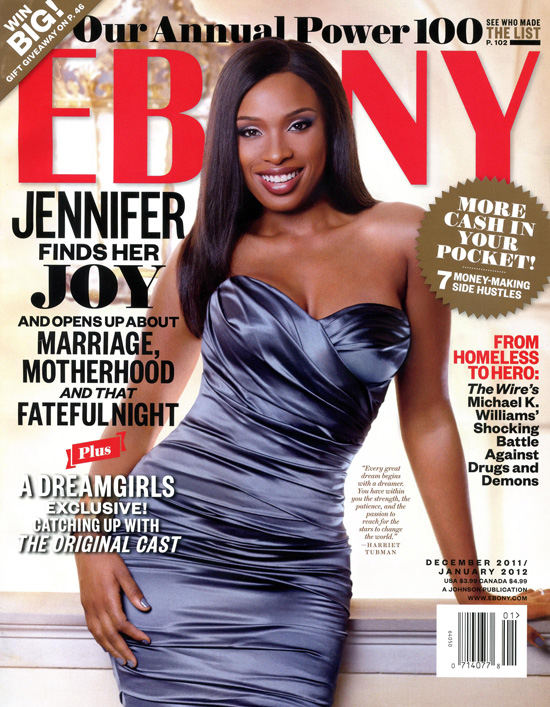 Songstress Jennifer Hudson is covering the Decemeber issue of Ebony magazine. In the magazine she touches on a number of issues that have surrounded her career. Most interestingly, she notes how her fiancee, David Otunga, saved her life. Read inside to find out how.

We all remember the tragic killings of her mother, nephew, and brother that occurred back in 2008. However, what we didn’t know was that Jennifer was supposed to be with them on the very day they were killed. The only reason she wasn’t there was because David asked her to come to one of his WWE matches out in Florida. In the magazine she states,

“He wanted me to come out to Florida with him instead of going to Chicago. I flew out to see him; thatâ€™s why Iâ€™m still here. Thatâ€™s oneÂ  of the things that saved my life. Because I could have been home with my mumÂ  then. Iâ€™ve never said that before, and I canâ€™t believe I just said that now. ButÂ  I didnâ€™t know.”

” I am going to finally address that size-zero thing that Joy [Behar] said on TheÂ  View. Hell I wasnâ€™t even on the show. I never said I was a size zero. I gotÂ  crucified by I donâ€™t know how many people who cussed me out because they saidÂ  Iâ€™m putting out the wrong message and telling people to be a size zero. I gotÂ  called every name under the sun and was told, â€˜You should be ashamed of yourselfÂ  for talking about being that size.â€™ Well, honey, when I do say Iâ€™m that size,Â  then give me that speech. I never said that.â€

There you have it folks! Unless you heard it come out of her mouth, don’t go for it! LOL! What do you think of Jennifer’s interview with Ebony?