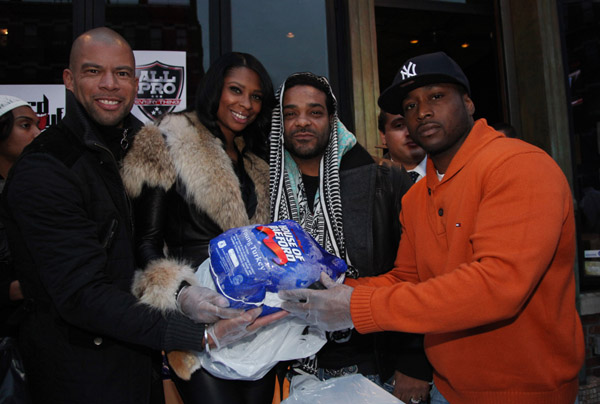 “Aint no love in the heart of the city”, or so they say, but Basketball Wives cast memember Jennifer Williams, Diplomat rapper Jim Jones and tv personality Al Reynolds beg to differ.Â  They are definately in the holiday spirit. They attended the 2011 Turjey Driven at Ricardo’s Steak House in Harlem where they gave out 5,000 turkeys to families in need.

TMZ also caught up with Jimmy to speak with him about the fight that went down between hisÂ  girlfriend, Chrissy and Juelz Sanatans baby mama, Kimbella onÂ  Love & HipHop.

Jones told TMZ that he spoke with hisÂ Santana after the fight, and everythings cool.

â€œI wish that it wouldnâ€™t have happened, but things happen.â€ He added, â€œI spoke to my brother about it, we cool. Shout to my lady Chrissy. Itâ€™s all good.â€

GladÂ to seeÂ know that Dipset’sÂ still a “family”. Its good to see people helping out families in need…but ummmmmmmm what about the other days that they are struggling……thanksgiving isnt the only time they have to eat.Â Not judgin…im just sayin….what do youÂ think?