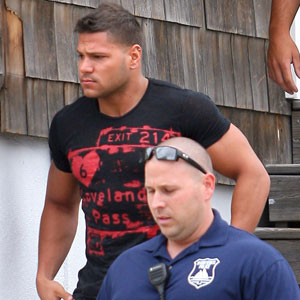 Ronald Ortiz, 24 year old Bronx native Â was placed under arrestÂ Â for outstanding warrants from two separate jurisdictions. I wonder if they filmed it since they arrested him at the cast’s current home? Can I get a fist pump? Lol.–Courtney L.
Police say the Bronx, N.Y., resident was released a short time later “after satisfying the conditions of the warrants.”

Ronnie was also arrested in September by Seaside Heights officers after a brawl on the boardwalk.

The arrest comes about two weeks after fellow cast memberÂ Nicole “Snooki” Polizzi was arrested on the Seaside Heights beach after other beachgoers reported she was bothering them.