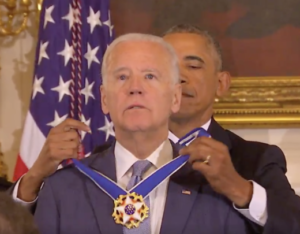 President Obama awarded outgoing Vice President Biden the Presidential Medal of Freedom on Thursday afternoon. Calling the former longtime Delaware senator “the best vice president America’s ever had” and a “lion of American history,” Obama gave his White House partner the surprise award in an emotional ceremony, initially billed as a farewell.

After transfiguring the job that Biden has done, Obama ended it with the unexpected news that he was giving the vice president the nation’s highest civilian honor, with distinction a designation most recently given to President Ronald Reagan, Pope John Paul II and Gen. Colin Powell.

“To know Joe Biden is to know love without pretense, service without self-regard, and to live life fully,” Obama said.

Overcome with tears and completely caught off guard by the award, Biden praised the president as “remarkable man who did remarkable things for this country” who had truly treated him like an equal partner in governance as reported by NPR.

“This honor is not only well beyond what I deserve, but it’s a reflection of the generosity of your spirit,” Biden told Obama. “I don’t deserve this. But I know it came from the president’s heart.”

The two have enjoyed an unusually close working relationship over the past eight years, and Obama himself even joked at the outset of the ceremony that “this also gives the Internet one last chance to talk about our ‘bromance.” Throughout the ceremony it was evident not just how close the two men were but how close their families and staffs had become, and Obama said his “family is honored to call ourselves honorary Bidens.” 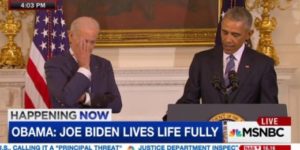 Obama has frequently said that picking Biden, his former primary rival, as his running mate in 2008 was one of the best decisions he ever made. Before accepting the nomination, Biden had spent more than three decades in the Senate, amassing a large portfolio and body of work, including stints as chairman of the Senate Foreign Relations Committee and the Senate Judiciary Committee.

The president said, laughing, that the people of Delaware sent Biden to the Senate as soon as they could, electing him to the Senate at the age of 29 (he turned the constitutionally required age of 30 before he was sworn in).

But before Biden could even head to Washington, his life would be marked with unspeakable tragedy for the first time. While Christmas shopping, his first wife and 1-year-old daughter were killed in a car wreck; his sons Hunter and Beau were injured in the accident. Biden considered resigning before he even took office but was persuaded not to. He was sworn into office at the hospital beside his sons, and for years he would famously commute back and forth every day on Amtrak to be with his family. Later on, he would meet and marry his now-wife, Jill, and they would have a daughter together, Ashley. 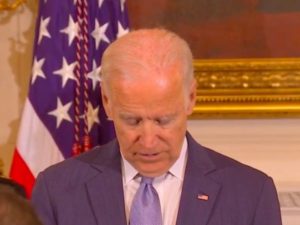 In 2015, tragedy would attack the Biden family once again when his eldest son, Beau, the former Delaware attorney general who was foreseen as his father’s political heir, died at the age of 46 from brain cancer. The loss came as the elder Biden was considerating whether he should make his own run at the presidency to succeed Obama. Months later, the still very upset vice president acknowledged his window had passed and said that he wouldn’t launch his own presidential campaign.