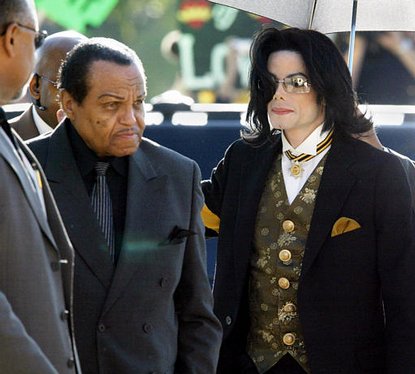 The homies over at Vibe.com are reporting that MJ’s Daddy isn’t very happy with all the gay rumors that are all over the internet.

After alleged associate Jason Pfeiffer said on television that the record-breaking entertainer behind such landmark albums as Off The Wall, Thriller and Bad was living an alternative lifestyle, Michaelâ€™s former physician Dr. Alan Klein backed up the claims. Klein told TMZ he walked in on Pfeiffer and the singer with their shirts off.
Michaelâ€™s father Joe Jackson vehemently denied the accusations. “It’s not trueâ€¦ Michael was not gay.”

Joe went on to add that he feels Klein has disrespected his sonâ€™s memory as well as their past friendship. “He has no respect for Michael… to say things about him when he’s gone is shameful.” “He’s a doctor and knows better than to break his vows against a patient.”â€”Keith Murphy

The King of Pop Michael Jackson, Â died June 25, 2009. If MJ was still here what do yall think he would be saying?