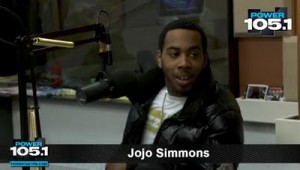 JoJo Simmons name has been in the news a lot lately and it hasn’t been because of his rap career. First he was accused of having relations with a transvestite named Julissa who had text messages to prove JoJo knew she was a tranny. Then, after all of that drama died down JoJo popped up again and was accused of being kidnapped from a Houston strip club and then having to pay a ‘hood tax’ before he was set free, (click here for the full story). JoJo has been pretty tight lipped about all of these accusations but recently decided to set the record straight on what really went down on Power 105.1’s Breakfast Club Morning show.

You would think JoJo would probably be a little better with handling his business since his father and uncle are legends in the game. What are your thoughts?