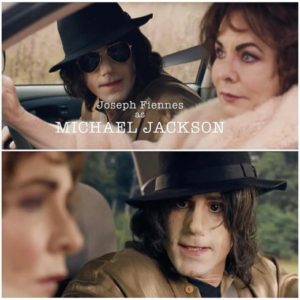 A year ago there was an uproar when it was announced that a white actor, Joseph Fiennes, would be portraying Michael Jackson in a British TV production. The trailer for the project — released Wednesday — has done little to assuage that furor. “Urban Myths” tells a series of stories, including a fabled one in which Jackson, Elizabeth Taylor (played by Stockard Channing) and Marlon Brando (played by Brian Cox) supposedly took a cross-country road trip after 9/11. According to CNN, the discourtesy of Michael Jackson being played by a white guy has social media going crazy.

The most disrespectful thing I’ve ever seen” one person tweeted.

The most disrespectful thing I’ve ever seen!⚡️ “Here’s your first look at Joseph Fiennes as Michael Jackson”https://t.co/nPrgsskcWn

“That is so stupid,” Jackson said. “That’s the most ridiculous, horrifying story I’ve ever heard. It’s crazy.”
Fiennes talked to The Hollywood Reporter about the role last year.

A photo posted by Celebritea Entertainment News (@thacelebriteaofficial) on Jan 11, 2017 at 4:42pm PST

The film is not a biopic, he exclaimed, and said “It’s Michael in his last days when, I have to say, he did look quite frankly rather differently than when we grew up with him in the ’80s or earlier.”

“The decision with the casting and the producers — I wrangled with it, I was confused and shocked at what might come my way, and I knew the sensitivity, especially to Michael’s fans and to Michael’s family,” Fiennes said. “It doesn’t negate who he was.”