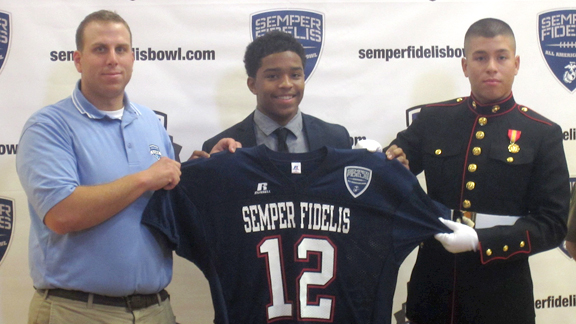 Justin Combs is stuntinâ€™ like his daddy. After working on a football career for years, Diddyâ€™s 17-year-old son, Justin Combs is now apart of the All-American team, a big deal for high school football players, although he hasnâ€™t decided on a college just yet.

Justin, who is reportedly a senior at Iona Prep high school in New Rochelle, NY, and plays football as the quarterback, kick returner, and cornerback, said itâ€™s a dream come true:

I dreamed about this when I was younger and now I donâ€™t even know what to say about it. Iâ€˜m just living my dream. All my hard work has paid off. I sacrificed my whole summer just to get better. I worked with professionals to improve my game. If you want something so badly you will do anything for it and I want this more than anything.

His coach, Vic Quirolo, also reflected on his work ethic:

I remember one time Justin told me that he flew out to Texas, for a whole week, just speed training. He is extremely dedicated, itâ€™s great to see. I thought that it wasnâ€™t until last year in the middle of the season he really came into his own. That was his breakout point. But you could always tell he was an athlete even as a freshman.â€

Only 100 kids, nationwide, were selected to participate in the televised all-American bowl on chase Field in Phoenix, AZ, January 3, 2012. Good look Justin!