Kandi Store Is Not Closing: Just A Low Life Blogger Making Up Stories Trying To Get Hits 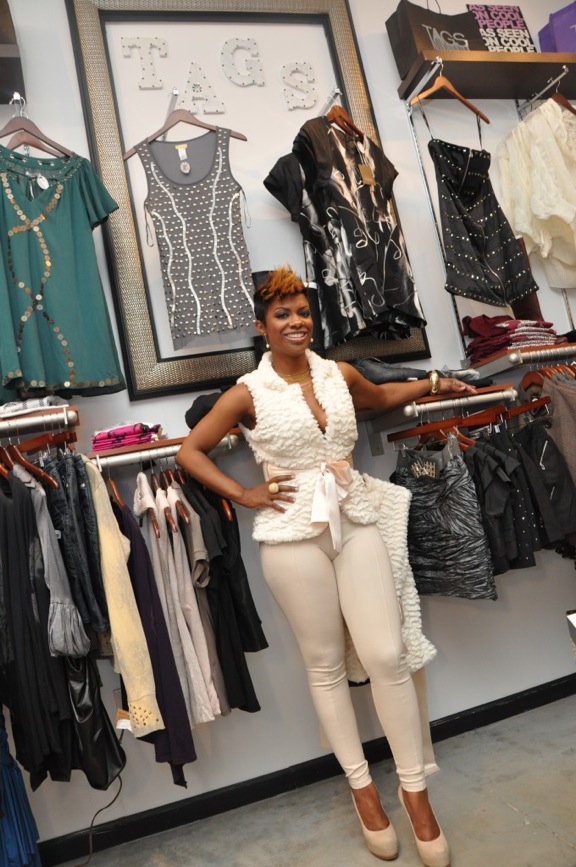 I never really understood why blogger make up false stories about people and lie to get page views. The AJC just got on the phone with Kandi and she categorically denied the story. â€œIt was a shock to me,â€ she said. Low Life Rose(I added that), never bothered to contact Kandi before posting the story.. But we all know SR does nothing but lie.

â€œOur store is doing very very well,â€ she said. She acknowledged that January was slow but thatâ€™s a traditionally quiet month for clothing retail anyway. She said November and December were very strong and the boutique just added online shopping as well at www.tagsatl.com. Click Here To See Pics.

Roseâ€™s story also noted that some customers have complained that the store hours are not regular. Kandi said itâ€™s open 11 a.m. to 8 p.m. on weekdays and a bit longer on weekends. She said one would-be customer tried to come by yesterday and tweeted to her that it was closed. Kandi said staff was attending a benefit hosted by fellow Xscape singer and â€œTiny & Toyaâ€ reality star Tameka â€œTinyâ€ Cottle yesterday. â€œItâ€™s a boutique,â€ Kandi said. â€œWe may close sometimes.â€

The story also said Kandiâ€™s partner Hortense Chin was annoyed that Kandi was focused on other projects. â€œThatâ€™s a lie,â€ Kandi said. â€œSheâ€™s the one who was really mad about the story. Sheâ€™s not used to people talking about her on the blogs.â€

â€œShe and I get along great,â€ she added.

Kandi said Bravo has also told her to not say a thing about the show. (Last week, she said to me she was still angling to be on season three but hadnâ€™ t signed a final contract yet.)Â  That tells me they must be getting very close to putting the cast together so everything is in lockdown.The show is scheduled to start shooting next month.

In the meantime, Kandi will be on â€œWho Wants To Be a Millionaireâ€ tomorrow and Thursday at 9:30 a.m. on WATL-TV locally. (Check your local listings if youâ€™re outside of Atlanta.) She will be helping a â€œreal housewifeâ€ out with pop culture questions, some of which will be about â€œThe Real Housewivesâ€ franchise.

TAGS Boutique is located at 4500 West Village Place in Smyrna. Itâ€™s off I-285 and Atlanta Road. I attended the opening late last year. My wife, the fashionista, liked the clothing, which is dubbed trendy but affordable.