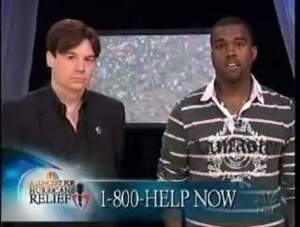 (11/04/2010) Leave it to Kanye West to go on national television and tell the world that President George Bush doesn’t like black people. Clearly, most Louisiana victims of 2005’s Hurricane Katrina felt this– but Ye had no problem announcing it to the world. However, President Bush didn’t take too kindly to this announcement!Â Â In fact he even addresses this as the worst moment in his presidency!Â In an exclusive interview airing next Monday with NBC, the former president that got our country into a whole messload of trouble explains that he is still offended by the bold statement made my West.

Looking back, Kanye really doesn’t have a change of heart. Instead now he affirms that former President George Bush doesn’t care about people in general.Â Now that would definitely be a credible statement– in the eyes of most people anyway. Catch the break to hearÂ Mr. West’s response!

I do find it disturbing that of all things to happen in Bush’s reign as president, he finds this statement to attribute as his worst moment in his presidency. I guess he forgot about other tragic fails–the War in Iraq or even September 11th! But hey… What do you expect?