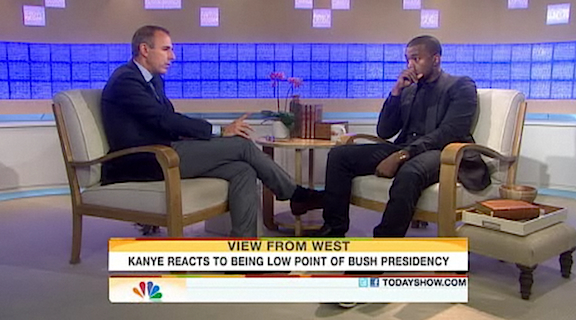 It’s safe to say Kanye West is less than pleased with his interview on the “Today” show. Kanye sat down with Matt Lauer earlier this week to apologize for the comments he made about president George W. Bush during a 2005 Hurricane Katrina telethon. “Today” aired a preview of Kanye’s interview on Tuesday, but managed to anger the rap superstar by including footage of him interrupting Taylor Swift at the 2009 MTV Video Music Awards. Kanye has since tweeted, quote, “I don’t mess with Matt Lauer or the Today Show…and that’s a very nice way for me to put it.” Kanye goes on to say that Lauer tried to force his answers, noting that the entire interview was “very brutal.” Kanye adds, quote, “I felt very alone very used very tortured very forced very misunderstood very hollow very very misused. I don’t trust anybody but myself! Everyone has an agenda. I don’t do press anymore.

Heres part of the interview