Kanye West is on a Twitter tear. The hip-hop star took to his twitter account Wednesday night, unleashing a marathon of tweets on a variety of subjects ranging from his new fashion line to his disappointment in America’s educational system. Kanye went on at length in several tweets about his fashion line Donda, likening his vision for success to that of late visionaries like Apple co-founder Steve Jobs, pop superstar Michael Jackson and fashion designer Alexander McQueen. He made a plea to “Help education,” suggesting a retooling of school curriculum to encourage more visionary thinking. Kanye also shared that he was reinvesting all of his earnings back into his creative ventures with the added notation, “I know this is not a very rapper thing to say but I haven’t bought a new car or piece of jewelry in about 2 years…”

Waxing on his Grammy nominations, Kanye maxed out Twitter’s 140 character-per-tweet limit saying, “I appreciate having the most nominations at the Grammies but I feel so conflicted by the fact that award shows are completely… illogical.” 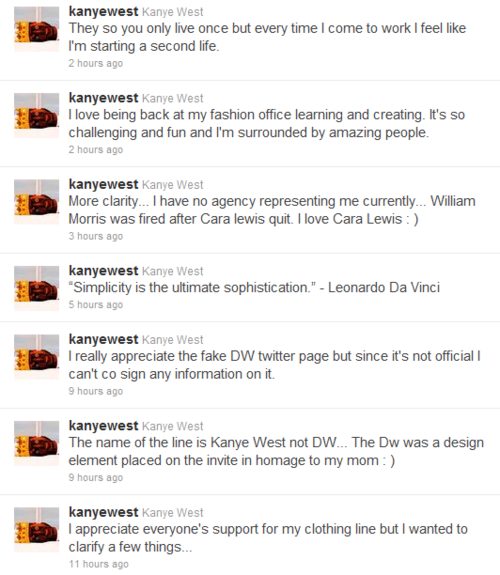 He also acknowledged that he owes his success, in part, to the validation he received from the Grammy organization. West is the nominee leader heading into next month’s Grammy Awards with seven nominations. CBS will air the 54th Annual Grammy Awards live February 12th at 8:00 pm Eastern.