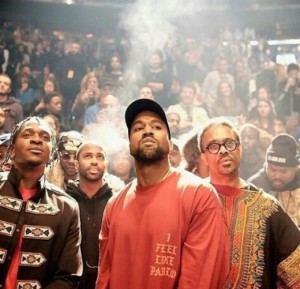 Kanye is at it again, using social media as a platform to express his feelings towards certain social issues. Well this time around it actually makes a lot of sense to many people.

Kanye tweeted “I’d rather teachers got paid more and books cost less…#2020.” Anybody that went to or is currently in college knows how expensive books can be, even the used books are a couple of hundred dollars. Well Kanye brought attention to this issue in his politically charged twitter rant earlier today. 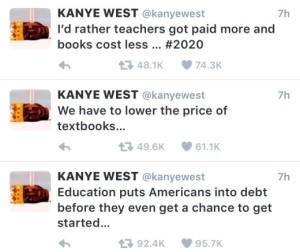 He was referencing a friend of his that has a child who recently got accepted into a college and how one book was over $400 and it would take the mother two full days of work just to pay for one book. Now I don’t know about you all, but that is insane and many people who follow Kanye agreed with him. He didn’t leave out the educators, saying that they need higher pay, which continues to be a big issue in our school systems. Maybe Kanye is on to something, I mean he did say he was running for President in 2020, hence he ended his twitter post by posting #2020.