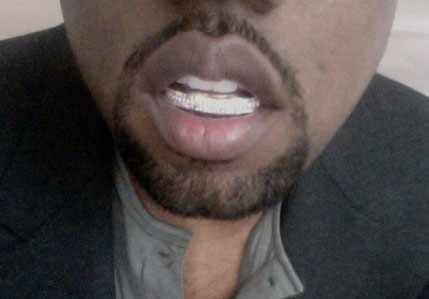 Kanye West is biting into a new look. The emcee stopped by the “Ellen” show on Tuesday where he showed off his new set of diamond teeth. Kanye discussed his new grill, telling host Ellen DeGeneres, quote, “It’s replaced my bottom row of teeth,” adding, quote, “I just thought diamonds were cooler.” When asked why he decided to put diamonds in his mouth, Kanye replied, quote, “There’s just certain stuff that rock stars are supposed to do.” Kanye’s new grill wasn’t the only thing he unveiled to “Ellen’s” audience on Tuesday.