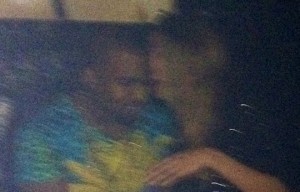 We’re not really sure WHO this is as of now but she is camera shy.

Once she realized the camera man was taking pics, she started trying to cover her face. Can’t blame her. Perhaps she’s not ready to make that big of a commitment just yet.

On the other hand, they did appear to be having a good time while the drinks flow. Although Kanye did recently gush about his feelings towards Amber Rose at a concert, I guess he’s over that…or at least trying to get over it. One thing is for sure…it will be interesting to see her replacement.

Do you think this is Kanye’s new boo or just a fling?

[youtube https://www.youtube.com/watch?v=miFldGvDq5o] VIDEO : Man Says POP SMOKE Murdered Over Debt & He Gave The Address To Killers... tell me what you think below ..
Read more