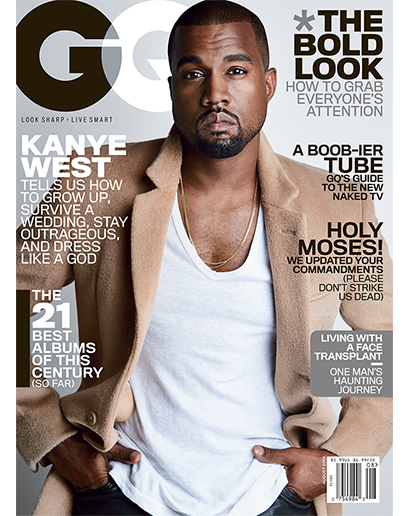 “GQ” magazine is putting Kanye West’s “My Beautiful Dark Twisted Fantasy” at the top of its list of 21 albums from the 21st century that every guy should listen to.

“GQ” Magazine chose Kanye‘s fifth album, “My Beautiful Dark Twisted Fantasy” but it admits that the top spot on its list could’ve gone to “any one of the seven albums West released this century.”

However, it chose the 2010 project because it captured Kanye’s “harrowing experience” of his time in the spotlight and turned it into a work of art.

Outkast’s 2000 album “Stankonia” was named number three on the list.  The magazine said the album went beyond hip-hop, dubbing it an “electric gospel.”

Lower on the list is D’Angelo’s “Voodoo” at number six, Frank Ocean’s “Channel Orange” at seven, and Ghostface Killah’s “Supreme Clientele” at the tenth spot.

Also on the list are Jay Z’s “The Blueprint,” Beyoncé’s self-titled album, and J Dilla’s “Donuts.”

Hip Hop has made a huge impact on GQ Magazine and American culture.

Who else should make the list of music every man should listen to?

Tell me in the comments below.