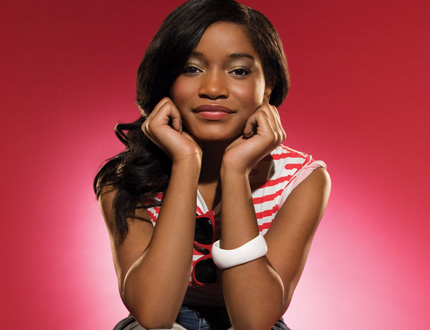 VIBE.com recently got the chance to meet up with Keke Palmer who talked to them about all of young hollywood. While most of young Hollyweird is plastered all over tabloids drunken out of their minds or dressed sexily beyond their years, Keke Palmer walks the road less traveled. The 16-year-old wunderkind who recently graduated from high school doesnâ€™t have a problem staying focused while balancing a productive career.

â€œPeople who want to be in the tabloids will get into the tabloids [and] I choose not be in them,â€ Palmer tells VIBE. â€œA lot of times when people run into those situations itâ€™s because they feel they canâ€™t do anything else for attention so they do the wrong thing. I just keep doing what Iâ€™m supposed to. Itâ€™s not that hard to just stay away if donâ€™t let yourself get manipulated by the people around you.â€

Palmer credits her family and her friends who mostly arenâ€™t in show business with keeping her humble. On her down time sheâ€™s taking FaceBook quizzes and hanging out at home but when sheâ€™s on, sheâ€™s all the way live. Palmer experienced her first taste of break out success as the lead role in 2006â€™s Akeelah and the Bee, alongside Angela Bassett and Laurence Fishburne. Since then, she has recorded a critically acclaimed album and is currently starring in her own TV show, Nickelodeonâ€™s True Jackson VP, which will air as a special made for TV movie on Saturday (May 22).

â€œTrue Trapped in Paris is very action packed and has a lot of cool stuff going on. One of my favorite things is they filmed it with a movie camera so itâ€™s going to look different from the [TV] show, with a cooler effect,â€ Palmer says. â€œThereâ€™s also a lot of little funny skits including one where I rap. We had a lot of fun doing it.â€