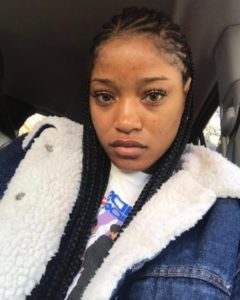 Yesterday a new music video caught the attention of Keke Palmer, who was absolutely repulsed when she learned that she herself had been involved without her consent.

As reported, Palmer claims Trey Songz secretly filmed her and used her likeness in his latest visual, but she adamantly alleges she wanted no part in it, even as going as far as to reveal she had hid from him because she was “afraid of any more conflict.” Now that some time has passed, Palmer has taken to social media once more to address why she continues to be hurt by how Trey Songz has taken advantage of her.

Posting a new update to her Instagram, Palmer shares that, “The gag is, I just came to party.”

Elaborating further, she writes, “I have no problem being filmed while knowing, snap-chatting, or twitter amongst friend for free is fine nobodies tripping bout that.”

“But when I’m invited over by a ‘friend’ for a party and then we go from hanging out snap-chatting to all of a sudden a full production, it is not okay to film me without my permission,” Palmer explains. “Then to make matters worst, use it to market a single you’re making money on? Come sis, that’s taking advantage of our ‘friendship’ and a public betrayal and I have every right to publicly address it.”

From there, the singer and actress explains why she chose to talk about this situation on social media, instead of contacting Trey Songz privately.

Life is life. This stuff happens everyday ain’t no different in “hollywood.” I guess I should say sorry for being real, but I won’t.

“I didn’t contact privately because I wasn’t contacted privately for approval, I seen it on a public website after already declining,” Palmer continues. “However this is for those that support me, you all know what I stand for, I stand for every voice being heard and I stand for whats rights in this industry and I call out what I think is wrong. So if I had to say no, in this situation, it was for a good reason.”

It’s okay to hide if that’s the best way to remove yourself from a situation, Hilary I’m still mad you said that ?. I have suffered with anxiety most of my life, I did not go to high school, I am a bit socially inept. At the end of the day, it doesn’t matter, what matters is I said “no.” After all that dramatic shit I still wound up in the video somehow. P.S. Don’t feel bad about saying how you feel.

At this time, Trey Songz has only alluded to the situation on his social media but has not addressed it directly.

Check out Keke Palmer’s latest message to the singer and her fans in the post below.

Looks like #KekePalmer had a couple more words for #TreySongz ?