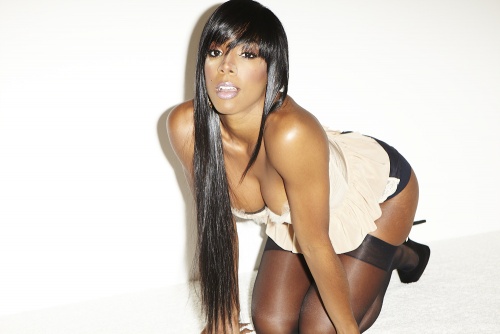 Vibe has featured Kelly Rowland on the cover of its August/September issue and we’ve got the preview for you. They also released a few of her cover outtakes. As usual, Kelly is tight and definitely creating a name for herself. In the article she discusses her former manager and uncle Matthew Knowles, love and being the first Destiny’s Child member to make it big outside of the group. Check out our snippet. Oh and she’s also got a few cover pic outtakes that we posted for you at the bottom.

VIBE: One of your ï¬rst solo looks was â€œDilemmaâ€ with Nelly. That song was huge. Were you prepared for that level of success without the group?
KELLY ROWLAND: No, I really wasnâ€™t. And I was the ï¬rst one from the group to have that level of success outside of the group. That bugged me out. I was veryâ€¦ I wasnâ€™t ready.The song blew up and Columbia decided to rush out your solo record.Yeah. The plan was for BeyoncÃ© to drop a solo record ï¬ rst. But with the success of the song, they decided to put my album out ï¬rst. They gave me 90 days to do an entire record.

The main reason why people donâ€™t believe that is because of Mathew Knowles. He was your manager. And he was a father ï¬gure to you. And you got rid of him as your manager. There had to be some tension there.
No. It was just a feeling of growing and wanting to call my own shots. That was it. I thank Mathew for everything heâ€™s done for me. He made me a millionaire at 18 years old. And then I felt like, â€œWell, Iâ€™m an adult now and I want to do things this way.â€

Was it more difï¬cult because you lived with him since you were a kid?
Yeah, it was more difï¬ cult. But I needed to be selï¬sh for a minute. I had to reclaim my power.

Did he try to talk you out of it?
Wellâ€¦ He just wanted me to be certain of my decision.

Do you think what happened with Columbia was connected? You left Mathew and a few months later you were dropped by Columbia Records.
I canâ€™t speak on what I donâ€™t know. I will say that it all worked out in the end. I have nothing to complain about.

Letâ€™s talk about love. How many times have you been in love in your life?
Once.

Okay, then, Iâ€™m going to assume this was the guy you were going to marry?
Oh. In that case, twice. [Laughs] Yeah. Twice.

Are you dating now?
Wellâ€¦ I really donâ€™t feel like I have the time for that right now.

What do you mean?
You donâ€™t have time to go on a date?