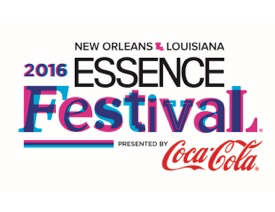 In addition, the ESSENCE Festival in New Orleans will present its first-ever World Music Superlounge, featuring artists from across the globe, including performers Wizkid, Zakes Bantwini and Skye Wanda representing Durban, South Africa (in partnership with the eThekwini Municipality).

For information about ticket sales, accommodations and the latest news about the ESSENCE FESTIVAL, visit www.essencefestival.com, join the festival community on Twitter @essencefest #EssenceFest and become a fan of 2016 ESSENCE Festival on Facebook.