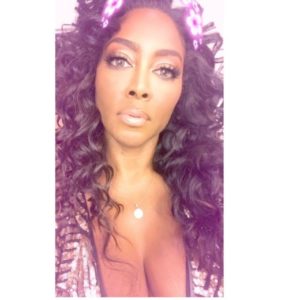 He’s knocked down door in her hotel room. Smashed the windows numerous times on her garage door. Crushed in the glass on the side door to her house. Hit her driver. Spray-painted her security cameras. And cracked the back window of her car.

And yet, after all the violent behavior Kenya Moore‘s ex-boyfriend Matt Jordan has exhibited on The Real Housewives of Atlanta, the 45-year-old former Miss USA has still decided not to pursue legal action against him.

“I decided not to file a restraining order against Matt,” Moore explained on Sunday’s all-new episode. “I’m just going to take some time for myself. I don’t know what’s happening with him. Until I figure it out, there’s no future in it.”

Making that choice was tough for Moore. The two had been on and off throughout their tumultuous relationship — fighting over petty things. Jordan’s jealously and immaturity fueled much of his rage according to Moore — though for weeks she was convinced there was still a good guy in there worth fighting for, which often brought them back together.

But they could never make it happen. Jordan appeared to be frustrated by the process of reality TV, calling Moore “manipulative and fundamentally deceptive” when producers tried to film an argument of theirs. Last week, he tried to say sorry and ask for forgiveness (again) — surprising Moore in Charlotte, North Carolina, at the opening of Peter Thomas‘s new club. The encounter did not go well, with Jordan again getting violent before speeded off back to Atlanta.

There, he made a visit to Moore’s house, were he damaged more of her property while she was not at home.

“What the hell is wrong with him?” Moore said, assessing the wreckage upon arriving home.

“He’s just trying to intimidate me,” she continued. “He’s lost his mind. He knows I wasn’t here. He’s not trying to hurt me. He’s just getting me to try to respond to him … I feel like I’m obligated to help him.”

Burruss, 40, didn’t agree. “Are you serious? You are kidding me. That dude is crazy! You do not need to mess with him no more,” she said. “What would have happened if you were there?”

The women discussed getting a restraining order, something Burruss and Moore agreed her father would recommend.

“Be he’s not afraid,” Moore pointed out. “The restraining order’s not going to keep him from coming over here.”

After speaking with Burruss, Moore turned to their mutual frienemy Phaedra Parks for advice — as Parks had experienced ex-husband Apollo Nida’s hot temper towards the end of their marriage.

“I’ve been in a bad relationship,” Parks said, after hearing Moore and Jordan’s history. “I feel for any woman who is going through it with a spouse, a partner, because it is emotionally draining and sometimes it can be dangerous.”

The subject of a restraining order cam up again, but Moore was still reluctant. “Matt keeps just keeps not being able to deal with things in a way that makes any sense to me,” she told Parks. “I did speak to the police and they said, ‘Listen if he really needs a different kind of help, jail is not going to do him any good.’ ”

Parks agreed. “Jail does not rehabilitate anybody,” she said. “It makes them kind of worse.”

The two discussed counseling — something Parks and Nida tried before their split. “Obviously it didn’t work out, but you give it a fair shake,” Parks said. “Once you’re married to someone, the bad behavior intensifies 100 percent. Because then they got you. I never saw what I saw in the end when we were dating. I didn’t know who he was at the end.”

“I think you can walk away once you said ‘I did the counseling, I did second chances,’ ” she continued. “But at the end of the day, you have to be certain of your safety and that’s paramount.”