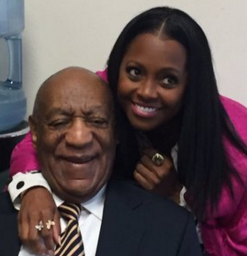 “I want to be the person that I would like to have if the tables were turned,” said Knight Pulliam, 38. “Right now it’s the jury’s job and the jury’s decision to determine guilt or innocence. It’s not mine or anyone else’s.”

Cosby was beloved as America’s Dad for playing Dr. Cliff Huxtable on “The Cosby Show” from 1984 to 1992. His Twitter account on Monday sent out a message thanking “Cliff and Claire’s 4 year old daughter (Rudy) and the Brilliant Spelman Alumnus.”

Thank you to Cliff and Claire's 4 year old daughter (Rudy) and the Brilliant Spelman Alumnus#TheCosbyShow#KeshiaKnightPulliam pic.twitter.com/5Ax9OiCjPV

Cosby, 79, is accused of drugging and violating an employee of Temple University’s basketball program at his suburban Philadelphia mansion in 2004. He could get 10 years in prison if convicted.

Knight Pulliam says she’s sensitive to the gravity of the charges, given her Kamp Kizzy Foundation’s mission to promote self-esteem, empowerment and motivation in girls.

She said that she is praying for everyone involved.

“I don’t condone sexual assault in any way, shape or form, but, at the end of the day, our court system is set up … you’re innocent until proven guilty,” she said. “The job now is for the two sides to prove their cases, and I accept whatever verdict is handed down.”