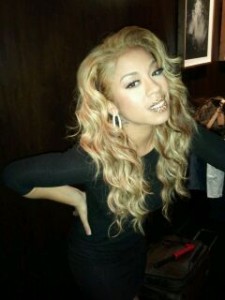 Our good friend Keyshia Cole showed off her new look via her twitter page (@keyshiacole) earlier this week and we are loving it.

Keyshia cole has always been a chameleon as far as hair goes so it’s really no surprise that she is rocking a longer look these days.

Keyshia also appears to be wearing the new “it” make-up trend with the leopard print temporarily tattooed lips.

Check out another photo of Ms.

Keyshia below and also take a look at the new video for the ‘Frankie Leg’ by her mother Frankie Lons after the cut.

Keyshia is set to drop her new album ‘Woman To Woman’ in February, (click here for the full story), and is also filming a new reality show, title ‘Family First’, with her husband, Daniel Gibson of the Cleveland Cavaliers (click here for the scoop). Those glasses are HOT!! Are you feeling her new look?

And in other Keyshia Cole news, her mother, Frankie recorded her song ‘The Frankie Leg’ a few months ago (click here for the story), and now we have the visual for her new dance hit. Check it out below.

LOL Frankie is hilarious. Will you be cranking that Frankie Leg at the club this weekend?