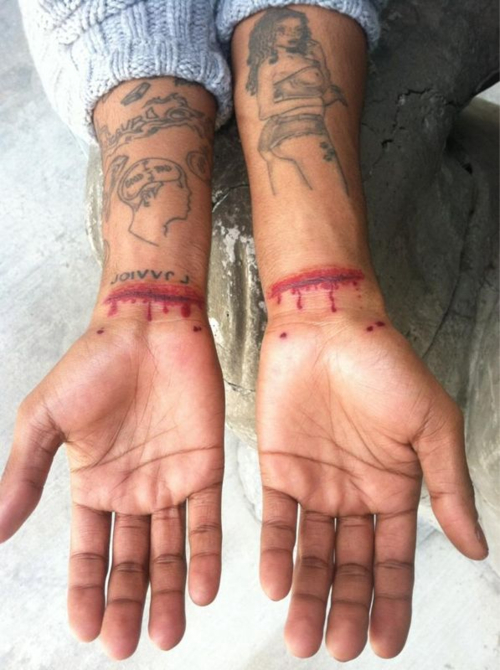 Kid Cudi killed his old self by way of his new tattoos. He posted the photo on his Tumblr, saying:
“New Tat…The old Scott is deadâ€¦slit wrists”

In other Cudi news HotnewHipHop reports also went on a Twitter-rant against his label for undershipping his joint album with Dot Da Genius, “WZRD.” Check out the full rant below.

who mad??? not me and @DotDaGenius : ) So its def gonna be tough to find one in the stores guys, Iâ€™m sorry about that. I gotta go out and find one too, becuz my weak ass label never even gave us a copy of our own album. FAIL!!! Im lettin Universal Republic have it, fuck it. What they gonâ€™ do, spank me?? hahahaha

While recording the album, he also tweeted:

When people refer to me as a rapper, I wanna shoot my face off. Right after I work with @HitBoy_SC and lay some raps. Rappers donâ€™t do a lot of things. Too many rules in Hip Hop. Always had a problem with rules. Rules Rules Rules. F-ck all that!